AHF Haiti has commemorated International Condom Day (ICD) in conjunction with a private gay pride celebration for the past two years. But for 2021, the team changed things up and put condom advocacy in the spotlight by joining a national television talk show, which also shed light on the stigma and discrimination often exhibited against the LGBT+ community

Participants included public health professionals, including AHF healthcare providers, activists and partners. Key topics discussed were the importance of condom use, access, and affordability, as well as practicing tolerance and ensuring equal rights for the Haitian LGBT+ community, particularly regarding healthcare and employment.

“The LGBT+ community, which is tremendously discriminated against in Haiti, is entitled to respect and tolerance from everyone,” said AHF Haiti Country Program Manager Karine Duverger. “Due to this stigma and discrimination, particularly among men who have sex with men – which have an HIV prevalence rate as high as 12.9% – it’s difficult to reach them to provide access to proper care. Mediums like this television broadcast help us educate the masses and break down these critical barriers to equality.”

The innovative project was broadcast nationwide and reached an estimated 30,000 people. 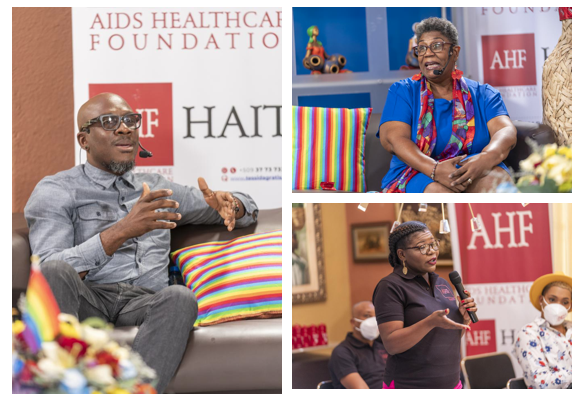 “We urge the Haitian government to strengthen its health policy to allow the National AIDS Program to enhance collaboration with partners working to control the HIV epidemic in Haiti,” added AHF Haiti Marketing Coordinator Mikson Antoine. “It’s vital that condoms be made available free of charge to everyone who needs them, regardless of their sexual orientation, religion or social status – and particularly to those who’re less fortunate.”

AHF has been working in Haiti since 2006 and currently provides HIV/AIDS care and treatment to 29,400 registered clients.

Be on the look out for a complete wrap-up of all ICD efforts coming soon from AHF country teams from around the globe!