Images from the red carpet and concert event can be viewed and downloaded here: http://assignments.gettyimages.com/mm/nicePath/gyipa_public?nav=pr552980550

Click on image below for a photo gallery of the concert event: 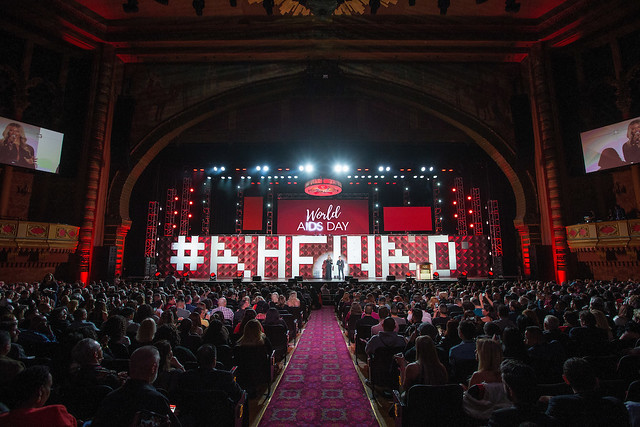 The free concert in Los Angeles is part of a series of events across the world to continue to spread awareness about HIV and AIDS. The activities will include free concerts in Haiti, Mexico City and the United States as well as free awareness and testing events throughout the U.S., Africa, Latin America, the Caribbean, Eastern Europe and Asia.

“It’s not an everyday occurrence to have a group of the world’s most talented stars put on a free concert to draw attention to the ongoing fight against HIV/AIDS.  We were so honored to have Mariah, DJ Khaled, Ne-Yo and the Debbie Allen Dance Academy join us in Los Angeles to celebrate World AIDS Day and the 30th anniversary of AIDS Healthcare Foundation,” said AHF President Michael Weinstein.  “As we look back on how far we’ve come over the last 30 years, modern medicine has made enormous leaps and bounds so that now, if you are in treatment and undetectable, you cannot spread HIV/AIDS.  AHF is more determined than ever to hold the U.S. and the international community accountable to keep their promise to end the global AIDS epidemic so that people around the world know to be tested, learn their status and have access to resources to the medications and resources needed to keep people living with HIV in treatment and healthy.”

According to UNAIDS, over 36 million people are living with HIV/AIDS around the world. Each year 2 million people become infected with the virus and 1 million people die of AIDS-related causes.  While millions of people today are accessing lifesaving antiretroviral therapy, millions more still desperately need it. The end of the epidemic is only possible, if governments and world leaders Keep the Promise on AIDS.”

Visit AHFWAD.org for more information on the concert events AHF will host in Miami, Haiti and Mexico City.