At the Miami concert, AHF honored Mayor Yulin Cruz with its 2017 AHF Humanitarian Award for her ongoing and courageous leadership in the aftermath of Hurricanne Maria’s wrath. Yulin Cruz issued a special ‘Call to Action’ for further community support while AHF raised awareness & funds for its Power2PR relief campaign.

AHF Southern Bureau Chief Michael Kahane and members of the AHF Board of Directors also presented Mayor Cruz with AHF’s 2017 Humanitarian Award for her ongoing courageous and heroic leadership following the recent tragedies that devastated the island as a result of Hurricane Maria.

“This was a terrific night and just a wonderful concert with amazing artists joining us to celebrate AHF’s thirty years of service to the community to address the growing HIV/AIDS epidemic, especially here in Miami-Dade and Broward counties,” said AHF Southern Bureau Chief Michael Kahane. “We are humbled that San Juan Mayor, Carmen Yulin Cruz also joined us, as we both honored her for her courageous leadership and allowed her a platform to put the critical needs of the people of Puerto Rico back front and center before the media. The cameras may have all gone away in Puerto Rico, but the needs of the island continue to grow. AHF is committed to continue to lead the charge in keeping the community engaged in supporting our fellow America citizens by raising awareness & funds for our Power2PR relief campaign.”

To contribute to AHF’s Puerto Rico relief effort, text “Power2PR” to 41444 or visit:Power2PR.org

The free concert World AIDS Day concert (observed December 1st) and AHF 30thAnniversary Celebration in Miami was part of a series of events and concerts across the world to continue to spread awareness about HIV and AIDS. The activities include free concerts in Haiti, Mexico City, Russia and the United States as well as free awareness and testing events throughout the U.S., Africa, Latin America, the Caribbean, Eastern Europe and Asia.

Click on the image below to see more photos from the event: 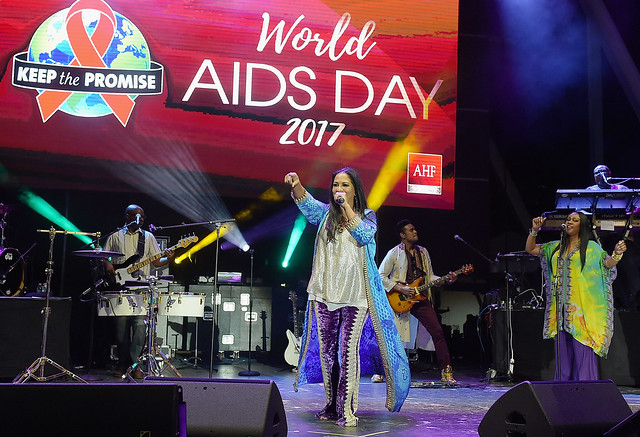