LOS ANGELES (August 7, 2017) — In celebration of Black Gay Men’s Wellness Month and to commemorate the 20th Anniversary of In The Meantime Men’s Group, AIDS Healthcare Foundation (AHF) and iN-Hale Entertainment hosted “INside | OUTside: Celebrating Our Storytellers”, a multimedia exhibit honoring past and present Black gay men who have made significant contributions to the arts and entertainment at NeueHouse Hollywood.

Black Gay Men’s Wellness Month was created in August 2014 by In The Meantime Men’s Group to bring attention to the importance of Black gay men’s health and to empower Black gay men to take charge of their own well-being through sustained healthy lifestyle choices.

“We live in a complex society where Black gay men are being called and challenged to stand up to issues including racism, homophobia, stigma, HIV and managing our mental, emotional, spiritual and physical wellbeing,” said Jeffrey King, founder and executive director of In The Meantime Men’s Group. “Black Gay Men’s Wellness Month is a focal point to help reinvigorate our movement to develop and sustain healthier communities around the country and ultimately the world.  This year’s Black Gay Men’s Wellness Month theme is ‘We Are Family, Together We Are Made Stronger’ and is inspired by the expressed needs of men that we encounter locally and nationally seeking help in gaining and maintaining their balance.  More than 120 local and national organizations and institutions have signed on to endorse Black Gay Men’s Wellness Month.”

“Storytelling is at the center of keeping our history alive and making sure we are visible not only within our community, but also to society at large. It is paramount to our overall wellness to be able to tell our own stories and hear the stories of our brothers, which is why this event is so special to me,” said Nathan Hale Williams, President, iN-Hale Entertainment, LLC.  “It is my honor and pleasure to host and produce this event celebrating some of my favorite storytellers: Daniel Beaty, Deondray Gossfield and Quincy LeNear Gossfield, Ben Cory Jones and, one of the most accomplished storytellers in our community, Patrik-Ian Polk.”

Immediately preceding “INside | OUTside: Celebrating Our Storytellers”, Native Son will host its first event in Los Angeles in partnership with AHF.   Launched in November 2016 by journalist, content creator and LGBT activist Emil Wilbekin, Native Son is a movement that honors and celebrate the achievements of Black gay men who have broken down barriers, defied stereotypes and made a cultural impact not only in the LGBT community but in the world at large.

“It’s exciting to host the first Native Son event in Los Angeles along with AIDS Health Care Foundation and iN-Hale Entertainment. To honor the work and legacy of Jeffery King of In The Meantime and Black Gay Wellness Month is exactly what Native Son is about: inspiration and empowerment for Black Gay Men. It’s a privilege to be a part of this collaboration ‘INside |OUTside: Celebrating Our Storytellers’ and having ownership of our own narrative,” said Wilbekin.

“AHF is excited to partner with iN-Hale Entertainment and Native Son to promote Black Gay Men’s Wellness Month and celebrate Jeffrey King and his impact on the community and the fight against HIV/AIDS through In The Meantime,” said Christopher Johnson, AHF’s associate director of communications. “We are looking forward to bringing together a wide section of members of the Black gay community in one room, ranging from advocates who are working at the grassroots/community level to create change in their local communities to the most accomplished power players.”

VIEW ADDITIONAL PHOTOS FROM THE EVENT BY CLICKING ON THE IMAGE BELOW: 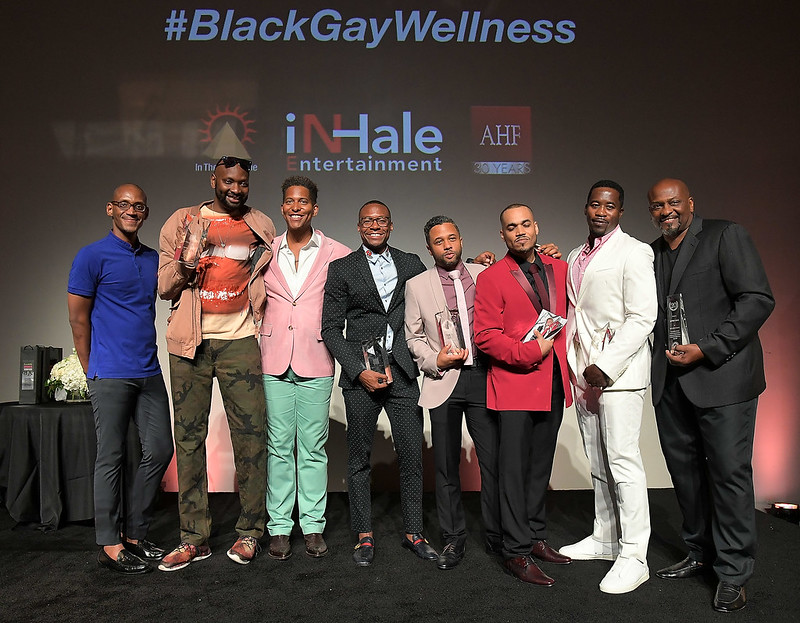