Inspired by the late Dr. Maya Angelou’s powerful and impactful poem, “Still I Rise”, the RISE Above campaign focuses on eliminating HIV-related stigma by educating and empowering women of color about healthy relationships, sexuality and wellness.  Launched in Oakland, CA in early March 2017 as a part of National Women & Girls HIV/AIDS Awareness Day, the campaign came to Chicago prior to National HIV/AIDS Testing Day (June 27).

On September 21, the RISE Above campaign tour will also hold an event in Cleveland, OH before culminating in Atlanta, GA in early November.

Heart & Soul magazine, a national publication dedicated to the health and well-being of women of color, has signed on as a national media partner for the campaign.

According to current statistics from the Centers for Disease Control and Prevention (CDC), 1 in 4 individuals living with HIV in the United States are women. Black/African American and Hispanic/Latina women continue to be disproportionately affected by HIV, compared with women of other races/ethnicities. Of the total estimated number of women living with diagnosed HIV at the end of 2013, 61% (137,504) were African American, 17% (39,177) were white, and 17% (38,664) were Hispanics/Latinas.

“Across our country, women of color from all backgrounds continue to be impacted disproportionately by HIV and other sexually transmitted infections,” said Vanessa Smith, executive director of South Side Help Center. “As we celebrate 30 years of service to communities across Chicago, we were so pleased to have our own Congresswoman Robin Kelly, who recently co-founded the Congressional Black Caucus on Black Women & Girls, join us for this event.  We’re also excited to partner with Goapele and Raheem DeVaughn, two amazing artists who are using their visibility to bring awareness to these issues. Bringing together black women and inspiring them to break through stigma and become both sexually educated and empowered to ‘rise above HIV’ is a goal we all share.”

To learn more about the RISE Above HIV campaign go to www.riseabovehiv.org.  For a special message from the artists visit: https://youtu.be/vyllGQAvka8

VIEW ADDITIONAL PHOTOS FROM RISE ABOVE CHICAGO BY CLICKING ON THE IMAGE BELOW: 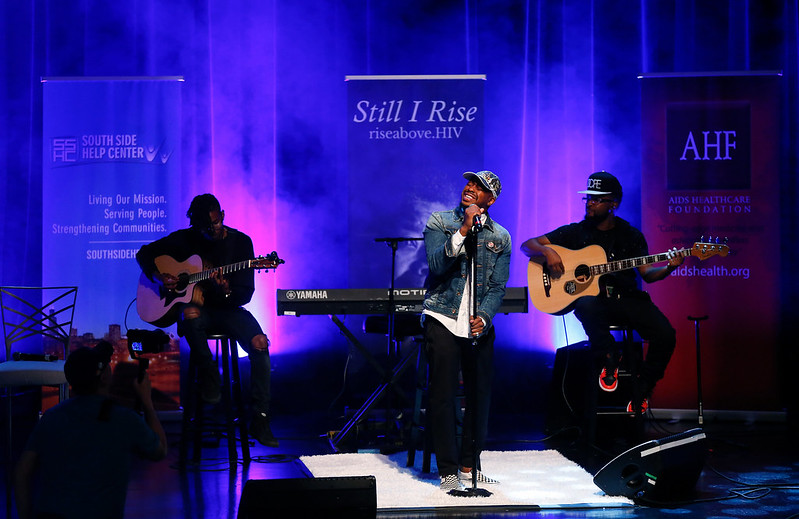