World’s largest AIDS organization, marking 30-year history of care and advocacy for people living with HIV/AIDS and the LGBT community, will participate in more than two dozen Pride celebrations across the country

BROOKLYN (JUNE 9, 2017) — AIDS Healthcare Foundation (AHF), the largest global AIDS organization, is proud to once again join the LGBTQ community in celebrating the 2017 Gay Pride season through its planned participation in more than two dozen Pride events across the country.  Founded in Los Angeles as AIDS Hospice Foundation in 1987 to provide a facility for terminally ill AIDS patients in California, AHF is celebrating its 30th Anniversary this year and continues to support LGBTQ equality and the expansion of health care services to treat people living with HIV/AIDS.  At festivals throughout the 2017 Pride season, AHF will give away free condoms, share information on STD prevention and treatment, and provide free HIV testing.

At the Brooklyn Pride parade on Saturday, June 10, AHF staff and patients will march in the twilight parade that will be led by AHF’s Northern Region Director of Pharmacy Sales Michael Camacho, who has been named a 2017 Grand Marshal.  The parade steps off promptly at 7:30 p.m. around Lincoln Place and ends at 9th St. & 5th Avenue.

“I am deeply honored to serve as a Grand Marshal for this year’s Brooklyn Pride parade,” said Camacho.  “The current political atmosphere has shown that the LGBTQ community must continue to stand up for our rights and not take them for granted.  Every Gay Pride march across the country this year is important to the community’s visibility.”

AHF is proud to support the LGBTQ community in Brooklyn through its AHF Healthcare Center, pharmacy and Out of the Closet Thrift Store, located at 475 Atlantic Avenue.  In the greater New York City area, AHF Healthcare Centers are also located in Chelsea, Midtown and Jamaica, Queens.

At the Capital Pride parade on Saturday, June 10, AHF staff, patients and members of the Impulse Group will take part in the annual parade that steps off Saturday, June 10, 2017 at 4:30 pm from 22nd & P Streets, NW, Washington, DC. The Pride Parade travels 1.5 miles through Dupont Circle and 17th Street, passes by the Logan Circle neighborhood and ends along the revitalized 14th Street corridor at S Street.

On Sunday, June 11 AHF will also march in the Long Island Pride Parade that begins at 12:00 p.m. on Broadway at Laurelton Blvd., and proceeds East on Broadway to Long Beach Blvd.

“Our AHF staff and patients always look forward to joining with the LGBT community at gay pride celebrations across the country each year.  Our presence at this year’s Pride is particularly meaningful for us as we mark our 30th Anniversary of providing care to people living with HIV and AIDS,” said AHF President Michael Weinstein.  “After 30 years of being on the frontlines in the fight against AIDS, we remain grateful to be able to provide access to medical care and breakthrough treatments that have allowed people with HIV to live longer, healthier lives and to help prevent transmitting the virus to others. Today, we are currently providing care to over 740,000 patients around the globe and we’re working to expand our operations internationally to be able to help even more people.”

For a complete list of Pride festivals in which AHF will participate in 2017, visit www.ahfparticipate.org

For more information on AHF Healthcare Center locations, AHF Pharmacy, and Out of the Closet Thrift Stores, visit www.hivcare.org. www.AHFpharmacy.org, and www.outofthecloset.org

Click on the image below to see more photos from the 2017 Brooklyn Pride: 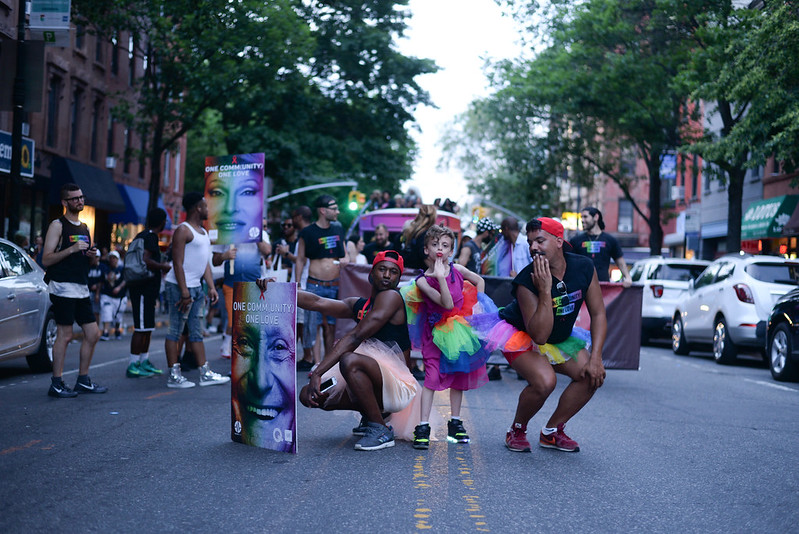