This is the drug giant’s third shortage or stock out in less than one year of Bicillin L-A, Pfizer’s key syphilis drug; pregnant women with syphilis remain at particular risk of passing infection on to their newborns unless Bicillin L-A is available for treatment.

NEW YORK (May 18, 2017) Health advocates from AHF and other groups hosted a midday protest in New York City today in front of the corporate headquarters Pfizer, the world’s third largest drug company, to protest a shortage or drug stock out of the drug giant’s key syphilis medication, Bicillin L-A (Penicillin G benzathine). This is Pfizer’s third shortage of the medicine—which is the only treatment recommended by the CDC for pregnant women with the infection—in less than one year.

AHF first sounded the alarm about the dangerous Bicillin shortage in May 2016 and then again in December 2016. Yet, the FDA and the Centers for Disease Control and Prevention (CDC) simply repeated the explanation from Pfizer, the producer of Bicillin, that manufacturing contamination caused the shortage. The shortage has recurred today, leaving health providers, particularly those treating pregnant women, scrambling for supplies of the drug. This month, the New York Department of Health issued an advisory to update the community of the status of the continuing shortages of Bicillin L-A.

Today’s protest in front of Pfizer’s headquarters at 235 East 42nd (between 2nd & 3rd Avenues) is intended to attract attention to the ongoing stock outs or drug shortages as well as attract the attention of Pfizer employees as they come and go for lunch and business appointments.

“Pfizer, which has the exclusive patent on Bicillin L-A, is the third largest drug company in the world, with more than $50 billion in revenue reported in 2016, yet, somehow this American pharmaceutical powerhouse has been unable or unwilling to prepare for, and/or meet the demand by medical providers, pharmacies—and patients—for its syphilis medication for nearly the entire past year,” said Jessica Reinhart, Associate Director of Community Outreach for AHF. “Through our protest, we will call on Pfizer to right this ship or allow a generic drug maker to begin manufacturing and selling the medication.”

The infection rates of primary and secondary syphilis are at a record high.  From 2014-2015, the national rate has increased 19 percent.  The CDC continues to recommend Bicillin as the first line regimen for treatment because it is one of the most effective tools in addressing this public health crisis. Treatment alternatives such as Doxycycline can’t be considered as a reasonable replacement as Doxycycline can’t be administered to pregnant women and because the dosage requirements create serious adherence challenges for patients.

The current Bicillin L-A shortage comes on the heels of an alarming Centers for Disease Control and Prevention (CDC) report released in October 2016 titled: “Reported STDs at Unprecedented High in the U.S.” According to an NPR article on the CDC report, “The number of people infected with three major sexually transmitted diseases is at an all-time high, according to a CDC report released Wednesday [Oct. 19].” NPR also noted, “… the increase in reported cases of chlamydia, gonorrhea and syphilis is hitting teenagers and young adults hardest.”

According to Centers for Disease Control (CDC) estimates, there are 20 million new STD infections each year in the United States, costing the healthcare system nearly $16 billion in direct medical costs. The agency also reports more than 110 million current cases of sexually transmitted infections in U.S. men and women.

VIEW ADDITIONAL IMAGES FROM THE PROTEST 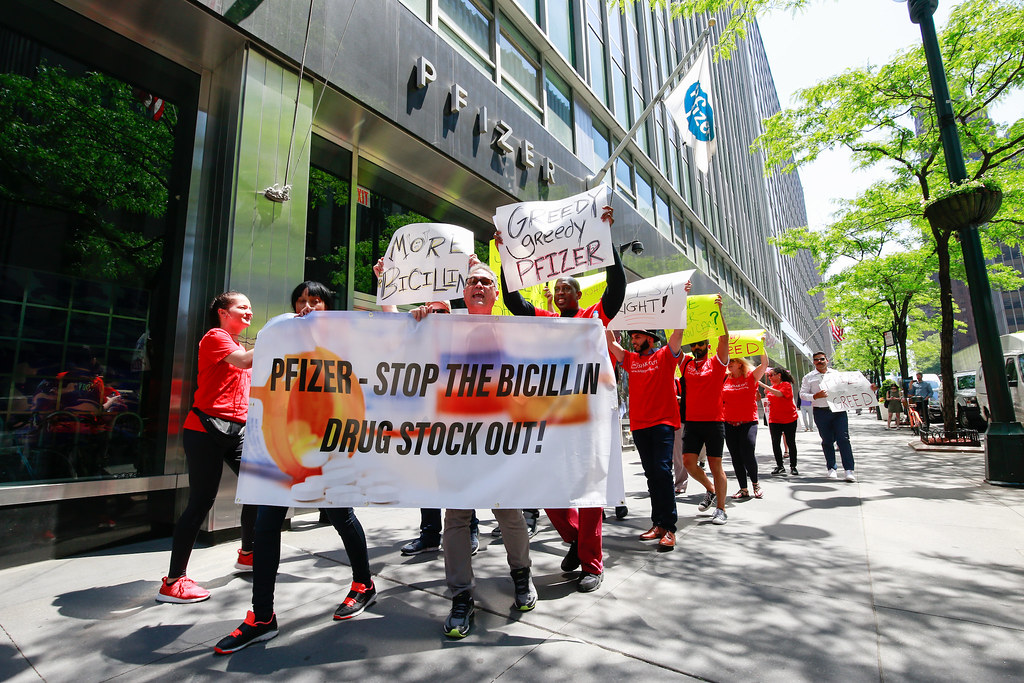