WASHINGTON (April 20, 2017) As officials gather for the Spring Meeting of the World Bank Group this week in Washington, DC, social justice and HIV/AIDS advocates, including those from AIDS Healthcare Foundation (AHF), will host a PROTEST outside the World Bank on Friday, April 21st from 12 noon to 1:00pm as part of an ongoing worldwide campaign to press bank officials to change the way the World Bank defines and classifies Middle-income Countries (MICs).

Unfortunately, usage of the bank’s country income classifications now extends well beyond the World Bank itself, and as a consequence of the often faulty MIC designations, countries with weak economies are now facing reductions in foreign aid, fewer concessionary development loans and higher prices for essential medicines—including for lifesaving antiretroviral therapies for HIV/AIDS.

The advocates and protesters gathering Friday in Washington are asking for the World Bank to set the lower limit of the MIC category at, or above $3,650 of GNI per capita – equivalent to about $10 per day. AHF, which spearheaded the ‘Raise the MIC’ campaign will also unveil a new related DC ‘Raise the MIC’ ad campaign headlined, “Rich Countries Shouldn’t Define Poverty for Poor Countries.”

“Seventy-five percent of the world’s poor—and the majority of people living with HIV/AIDS—reside in countries which the World Bank currently classifies as some bracket of Middle-income,” said Terri Ford, Chief of Global Policy & Advocacy for AIDS Healthcare Foundation. “The International Poverty Line is $1.25 per day, while the lower limit of the current MIC bracket is only $2.86 per day—just $1.61 per day more than the International Poverty Line and about the price of a cup of coffee. That is not Middle-income! We are protesting to respectfully, but emphatically urge the World Bank to revise its income classification methodology so that it is more closely aligned with the economic realities of the people in the developing world and push Middle-income designations up to the equivalent of about $10 per day.”

“A common interpretation of ‘Middle Income’ classification is that people in this bracket should have sufficient income to satisfy the basic necessities of life such as adequate housing, food, clothing and access to health care,” said Loretta Wong, Senior Director of Global Advocacy and Policy for AHF, and who is based in Hong Kong. “The fact is, many of these classifications make citizens of countries erroneously classified as Middle-income unable access to lifesaving interventions reserved for Low-income Countries such as foreign aid, concessionary development loans, and the countries and people face higher prices for essential medicines—including for HIV/AIDS treatments—whether or not that is the World Bank’s intent.”

“The mission of the World Bank is to end extreme poverty within a generation and boost shared prosperity. This goal cannot be accomplished by simply renaming developing countries into MICs; the underlying problems associate with global poverty will remain in place until we face up to reality and start calling things for what they are,” said John Hassell, National Director of Advocacy for AHF. “The existing World Bank income classification scale sends a global message that distorts the reality and does not accurately reflect the income levels of the majority of people living in these countries. We are asking The World Bank to overhaul and update its country classification system immediately.”

A prime example of the negative effect of faulty World Bank country income classifications can be seen today in Venezuela, which the World Bank inexplicably classifies as Upper Middle-income, despite the economic turmoil and humanitarian crises roiling that country.

On January 18, 2017, the Venezuelan Network of Positive People (RGV+), and HIV/AIDS assistance group in Venezuela was denied lifesaving financial aid from the Global Fund, which—using World Bank country income classifications—said the Venezuelan group was “…ineligible due to its (country’s) income level classification.”

On March 13, 2017, AHF president Michael Weinstein sent a letter to Global Fund leaders decrying their use of World Bank country income classifications and, “… to clarify the World Bank’s position on the use of its income classification methodology by the Global Fund. On February 18, 2016, I (M. Weinstein) met with Mr. Matthew T. McGuire, the United States Executive Director of the World Bank Group, who assured me that the World Bank classifies countries by income level for analytical purposes only, and that this methodology is not intended for use by other entities such as the Global Fund.”

AHF is also unveiling a new advocacy advertising campaign in Washington to bring awareness to the Middle Income Country issue. Starting in early April. The campaign includes 25 DC area transit shelter ads as well as a mobile billboard that has been driving the streets of Washington near the World Bank meeting site all this week. The ads all drive to the ‘RaiseTheMIC.org’ campaign website.

2015 World Bank Protest in DC and Raise the MIC Campaign

In September 2015, in conjunction with a World Bank meeting also in Washington, a coalition of over 310 organizations and advocates from 30 countries launched the global ‘Raise the MIC’ campaign and online petition drive urging Dr. Jim Yong Kim, the President of the World Bank to reconsider the way the Bank defines and classifies Middle Income Countries (MICs). Advocates were then, and remain today increasingly concerned about such faulty MIC designations by the Bank, as they adversely affect pricing and cost of a wide assortment of goods and services, including triggering far higher prices for lifesaving HIV/AIDS and other medicines in the countries. A billboard and transit shelter advocacy ad campaign accompanied that initial launch of the Raise the MIC campaign in 2015. In addition, several ‘Raise the MIC’ protests, advocacy actions and media campaigns have since taken place around the globe since then including in Peru, China, Cambodia, Kenya and Mexico.

CLICK ON THE IMAGE BELOW TO VIEW ADDITIONAL PHOTOS FROM THE PROTEST: 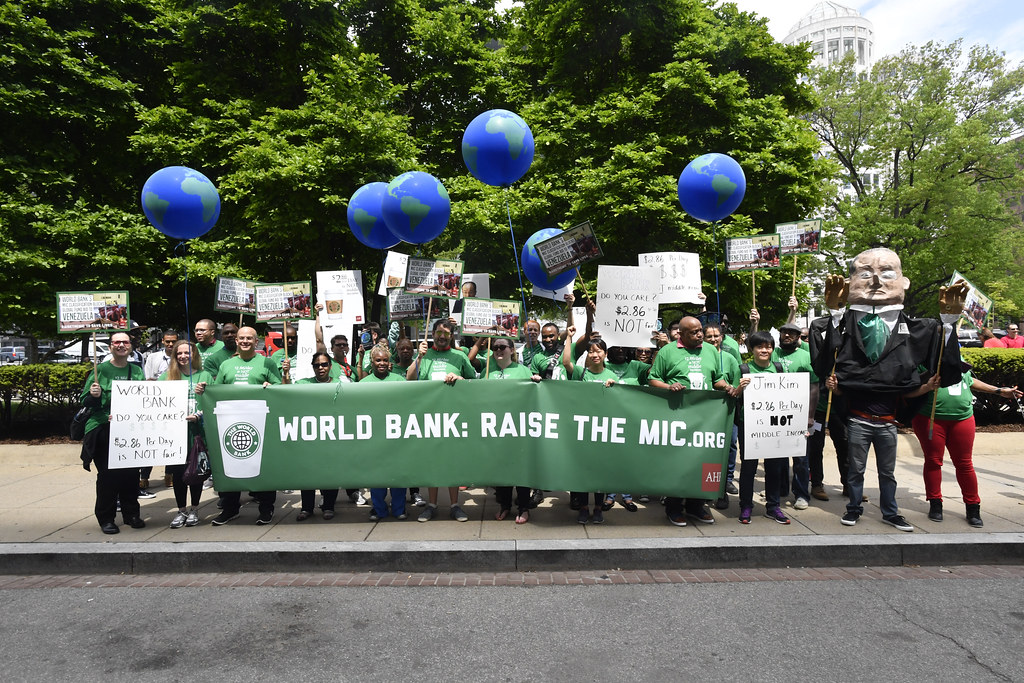